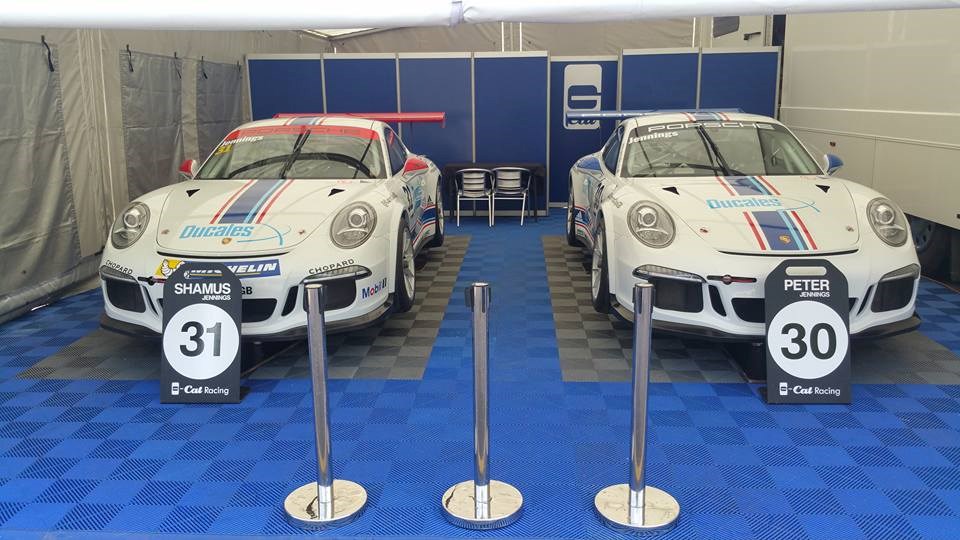 Here at 911Box we would like to say a massive thank you to Shamus and Peter Jennings who have given us the opportunity to run our Company Logo's on their No 30 and No 31 Porsche Carrera Cup GB cars in the 2016 season. The Logo's are now VERY PROUDLY placed on the rear quater panels of each car. The cars are being overseen by the EXTREMELY TALENTED, PROFESSIONAL AND WINNING G-Cat Racing Team.

THE SEASON OPENER IS THIS WEEKEND APRIL 2nd/3rd at the BRANDS HATCH RACE CIRCUIT IN KENT.

WHY NOT COME ALONG AND SUPPORT THE TEAM.

Well, the first two rounds of the Carrera Cup GB season at Brands Hatch on 2nd/3rd April are now over. The No's 30 and 31 G-Cat Racing cars of Shamus and Pete Jennings had some high and some low points. Shamus P/AM 2 Class in the 31 car suffered some gremlins in race one but still managed to bring the car home to finish so well done Shamus. Pete in the 30 car had been newly upgraded to P/AM 1 Class had a good race and came home 4th in class after some hard racing so well done to Pete.

Race two brought more bad luck for Shamus No 31 when a slight coming together resulted in a broken suspension arm which forced his retirement from the race. Pete No 30 again had a good race with some hard fought places bringing him home 5th in class this time.

The next meeting round 3 and 4 will take place on 16th and 17th April.

Here's Wishing Shamus And Pete the very best of luck in the next two rounds.

If you can attend don't forget to watch out for SHAMUS and PETE JENNINGS in the G-Cat Racing Run Number 30 & 31 Carrera Cup Cars.

''NO EXCUSE FOR NOT WATCHING NOW''.

Rounds 3 and 4 of the Carrera Cup GB was interesting to say the least when the snow fell on saturday morning at Silverstone which resulted in qualifying being cancelled and the cars took to the grid for the first race in championship order. At race time it was a big decision as to which tyres to run in race 1. Shamus and Pete took off like scalded cats but sadly slowly went backwards as the track changed to come home 5th and 6th respectively in their classes. Race 2 was a lot better and Pete got his first podium of the year and first podium in his new Pro/AM 1 class. It turned into a tough race for Shamus after leading in the Pro/AM 2 class to end up 4th, a really good effort and so unlucky not to be on the podium this time.

The next meeting, rounds 5 and 6 will be held on 4th/5th June at Oulton Park Circuit in Cheshire.

Again we wish Shamus, Pete and the G-Cat Racing Team the very best of luck in the next rounds.

Well Rounds 5 and 6 of the Carrera Cup GB finally arrived at the Famous Oulton Park Circuit in Cheshire over the weekend of 4th/5th of June.

Qualifying took place on the Saturday morning which was a bit processional due to the amount of traffic on track so not able to put in the times possible on this circuit.

Round 5 took place on Saturday Afternoon which again was difficult to overtake due to traffic resulting in Shamus Jennings finishing 5th in the ProAm2 Class and Pete Jennings finishing 6th in his first season in the ProAm1 Class. Round 6 which took place on the Sunday was a lot better for SHAMUS who after a long hard fought battle stood on the 2nd step of the Podium finishing 2nd in the ProAm2 Class. The TV Camera crew also obviously appreciated SHAMUS'S efforts as they spent a lot of time with the camera trained on his great battle. PETE didn't fare as well as he normally does in this race picking up some damage earlier in the race and suffering a spin in the chicane towards the end. He will definitely bounce back next time. 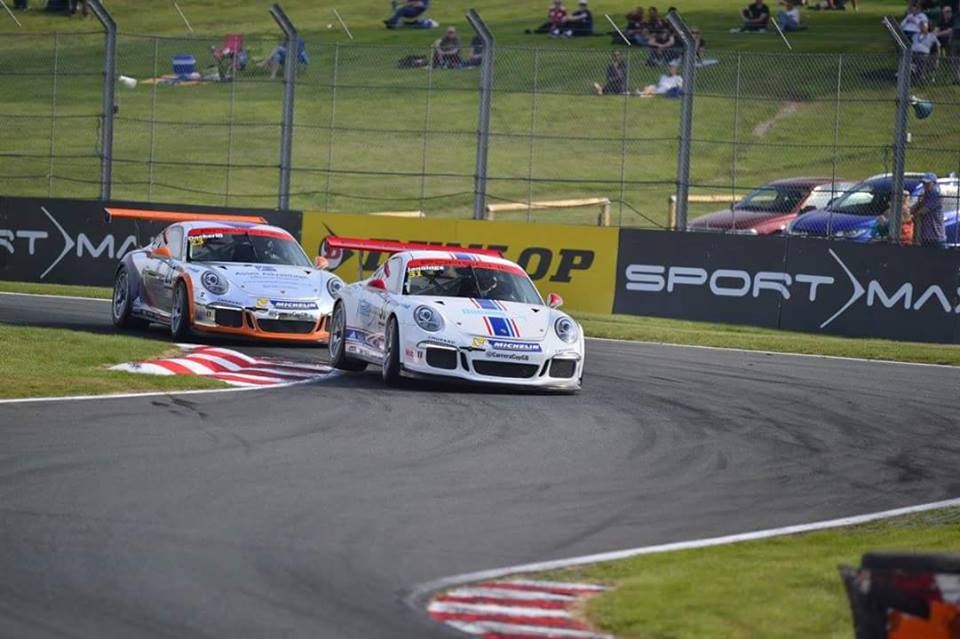 If you see Shamus, Pete, or the G-Cat Racing Team give a big cheer for them at Croft.

Round 9 and 10 on 30th/31st July were held at the Snetterton 300 Circuit in Norfolk brought something different to the team in the owner of G-Cat Racing GREG CATON who is a very experienced racing driver in his own right was deputising for Pete Jennings who was otherwise engaged. Greg had never raced a Carrera Cup Car before and was thrown in the deep end in the Pro-Am 1 class. A very exitinn race1 brought the Ducales Backed Cars Of Shamus and Greg some very good good results. Shamus came home 3rd in Pro-Am 2 and Greg 2nd in Pro-Am 1 in his first ever race in the car so the whole team was very upbeat for race2 which was unfortunately not so good as Shamus got a large tap in the rear which spun him out of contention through no fault of his own and Greg suffered from a slowly deflating tyre throughout the race which badly hampered his progress. All in all quite a good day though and the drivers and team were quite happy with their days hard work. 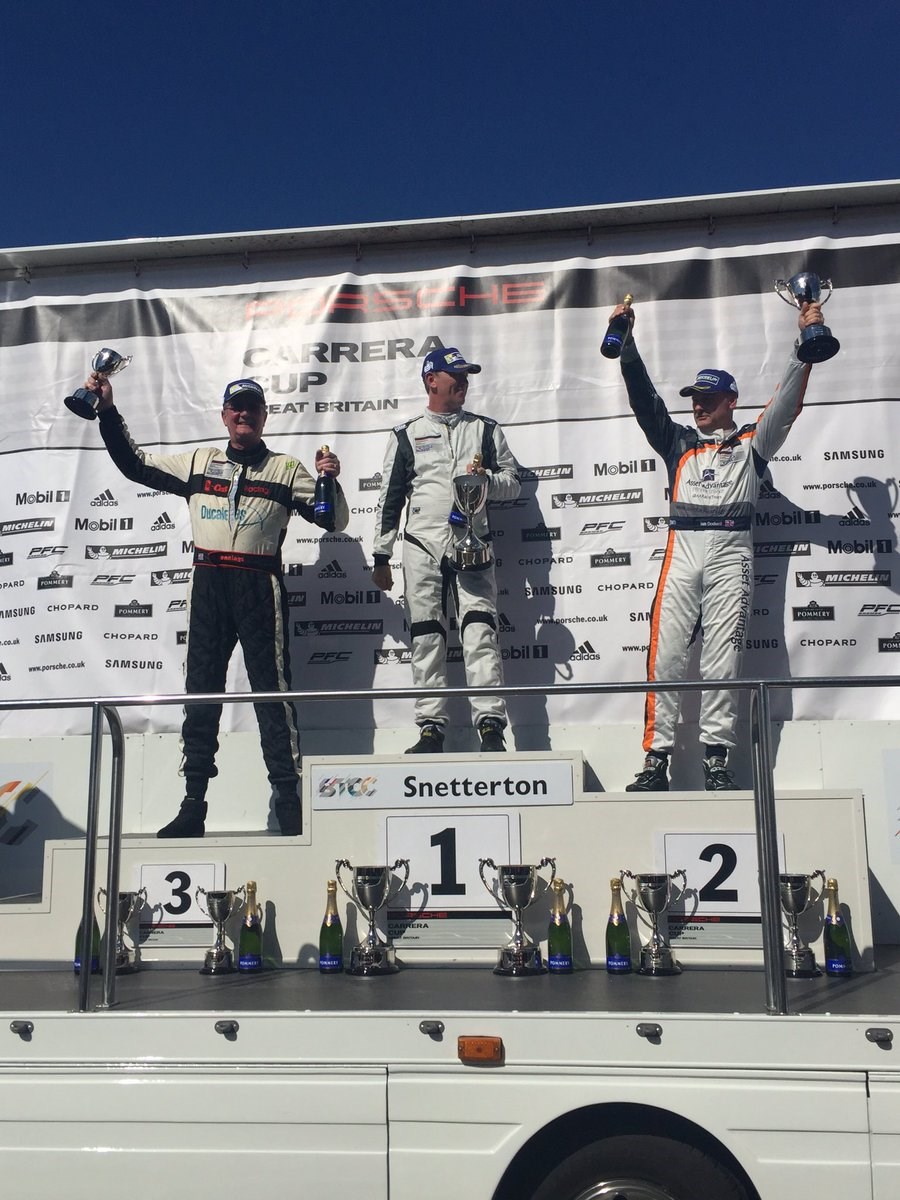 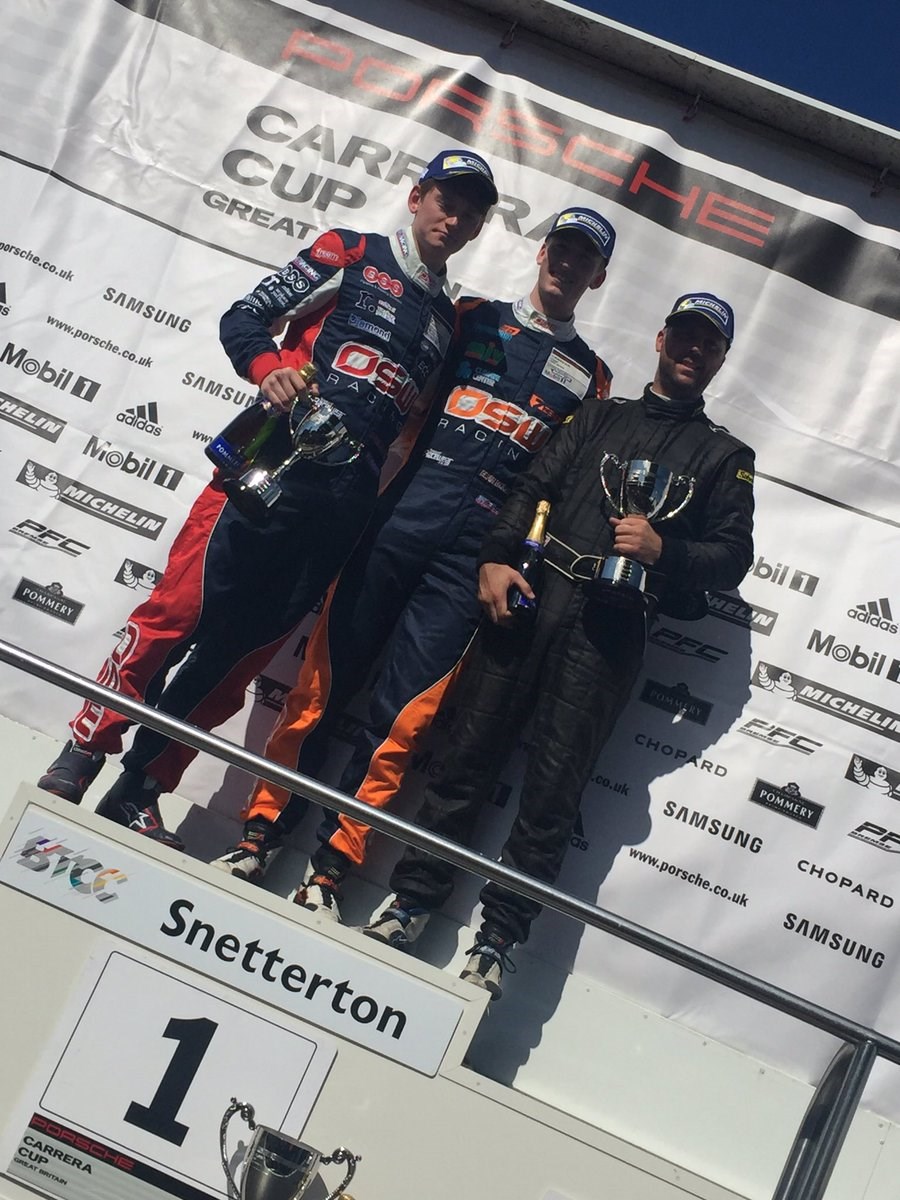 Rounds 11 and 12 were held on the weekend of 13th/14th August at the Knockhill Race Circuit in Scotland. The G-Cat Racing Team ran just the number 31 Ducales backed car of SHAMUS JENNINGS as PETE JENNINGS was still unavailable for the meeting. This was a great weekend for SHAMUS and the G-Cat Team. In race1 Shamus brought the 31 car home in 2nd place in the Pro-Am2 category to visit the Podium and collect his first Trophy of the day. Race2 saw Shamus finish in 3rd spot after being swiped in the side by an overtaking car, this gave him a second visit to the Podium to pick up his second Trophy where he was also awarded the Accolade of 'DRIVER OF THE WEEKEND' which gave him his third Trophy of the weekend. Good on you SHAMUS. To say Shamus and the G-CAT boys were ecstatic would be an understatement. WELL DONE BY THE WHOLE TEAM. 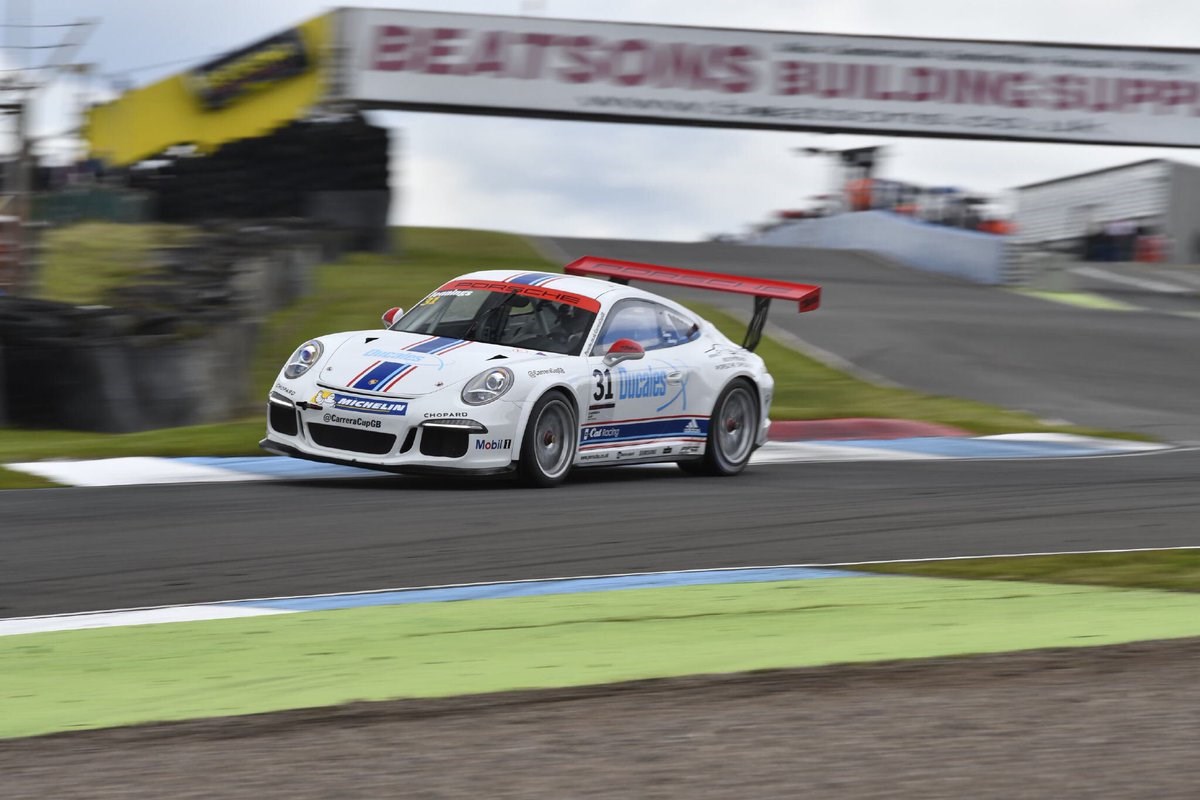 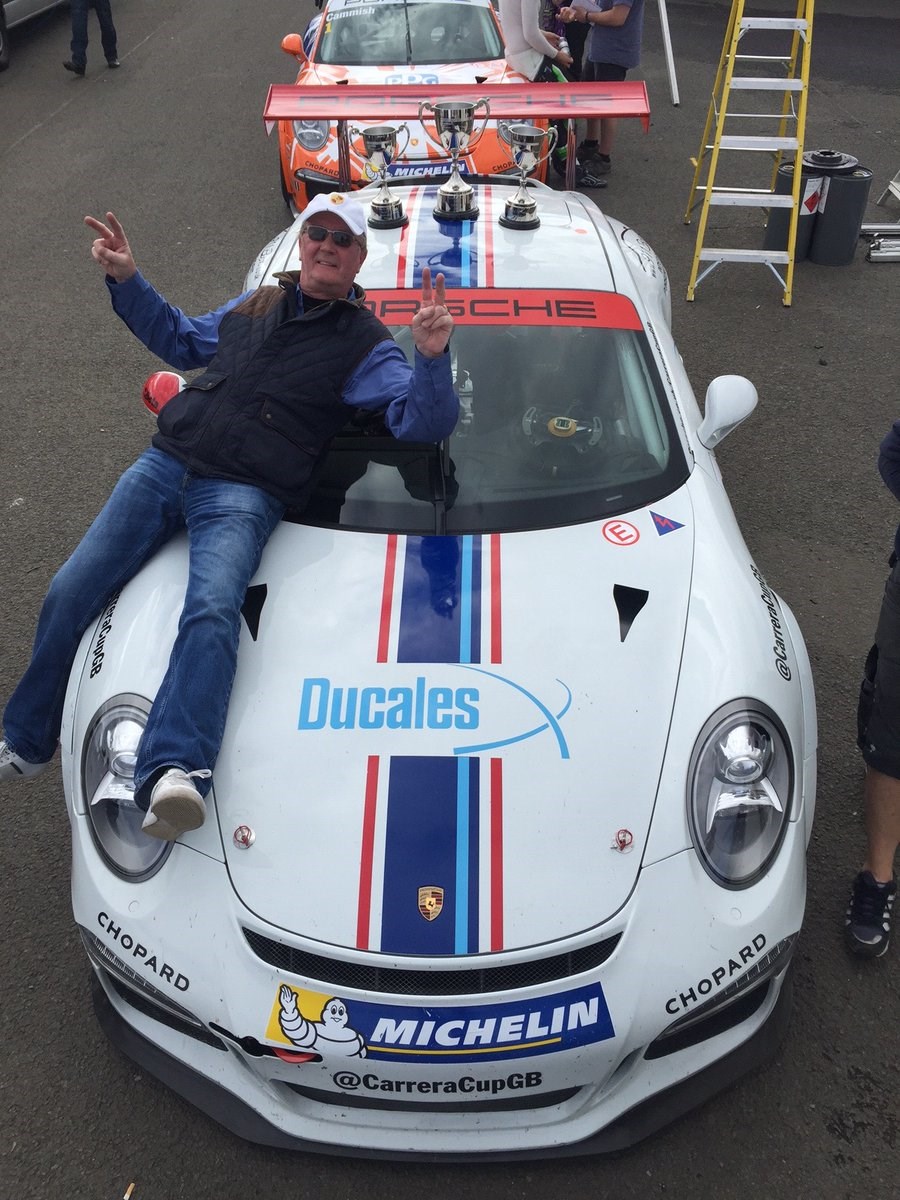 Well rounds 13 and 14 of Carrera Cup GB held at Silverstone Circuit on 17th and 18th September were a mixed bag. Free practice and Qualifying were up and down as the ever changing weather brought some wet and dry weather. Race day was better. Only the No 31 car driven by SHAMUS JENNINGS and run by the G-Cat Racing Team was competing at this meeting as PETE JENNINGS was still unavailable.

Race 1 was very exciting but SHAMUS was trying so hard he exceeded the track limits and was given a five second penalty which took away any chance of a podium. Five seconds is a big margin in this ultra competitive one make series.

Race 2 brought us a race which was just as exciting as race 1 only this time SHAMUS did everything to perfection bringing the No 31 car home in first place in the ProAm 2 class. SHAMUS'S first win of the season came from a brilliant drive and from the excellent preparation of the G-Cat Racing Team. 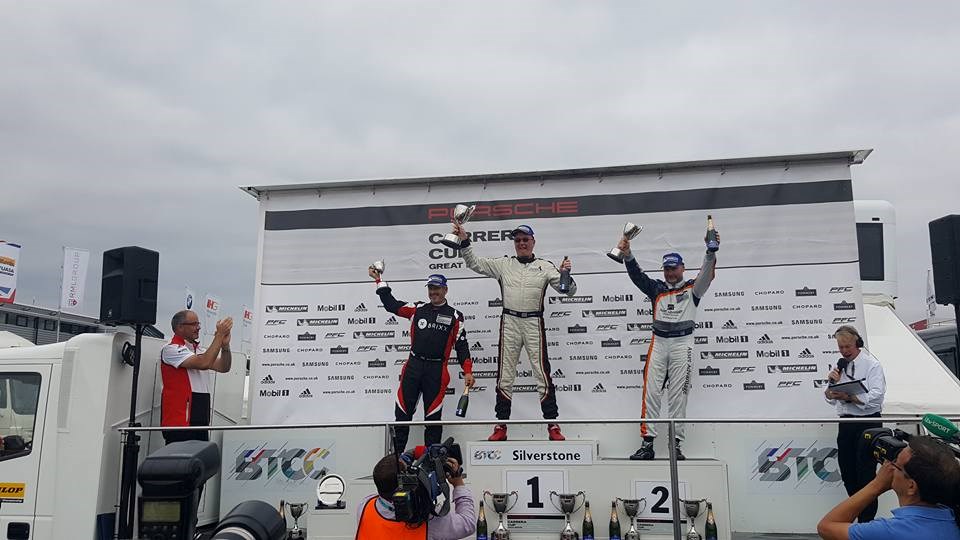 Here we go again for the last time this season. THIS WEEKEND 1st / 2nd OCTOBER LAST 2 ROUNDS OF THE CARRERA CUP GB BRANDS HATCH GRAND PRIX CIRCUIT DON'T MISS IT. If you can't get there watch it live on Sunday ITV4.

Undoubtedly the G-Cat Racing Team will be as professional as ever and have the cars in as new condition and as usual set up spot on for the racing whatever the conditions.

The last Carrera Cup GB meeting of this season. It took place at Brands Hatch Race Circuit on 1st/2nd October. After a very wet qualifying on Saturday the Sunday race day could surely only get better. Unfortunately due to carnage in the Ginetta Race on Saturday afternoon the race was rescheduled for Sunday morning putting the Carrera Cup Round Fifteen back to Midday. Race 1 was good for Pete on his comeback after being out of the car for almost 3 months as he held his own to come home 7th. Shamus got caught up in a few traffic jams but was still able to get home in 5th.

Race 2 was different as Shamus took of like a scalded cat when the lights turned green and after some hard battling came home in 2nd place giving him yet another Podium for the season. Pete was definitely getting back up to full speed now and after being involved in a small mishap came home 2 places better in 5th place.

Another great days racing with Shamus and Pete Jennings and the G-Gat Racing Team. The company was second to none and i could not have been made to feel more welcome. Thank you all so much for your hospitality and generosity over this 2016 season. 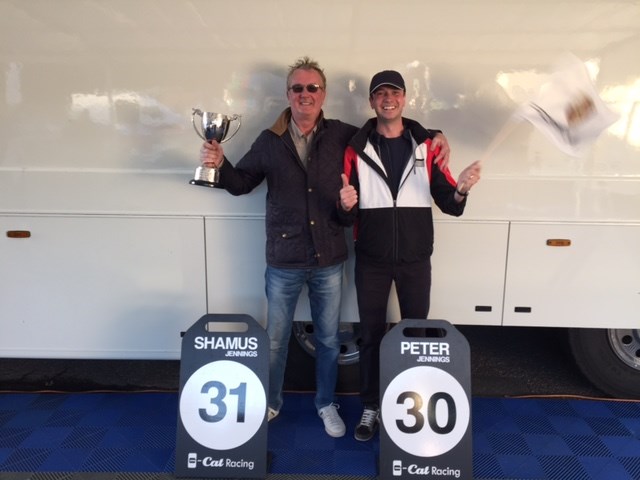